[twitter.com]
Re: We dodged the Rich Energy Bullet
Posted by: Myvatn (IP Logged)
Date: 10 July, 2019 19:27
I wouldnt speak too loud - Rokit is nowhere near as ridiculous, but I still feel quite unsure about them too.

Quote:
CLOVERLEAF 888
So is that with immediate effect or till the end of the season?


From what I can gather from social media, no one is really sure, even the motorsport writers and HAAS to my knowledge hasn't responded.

The way the tweet was worded I think it implies "immediately"
Re: We dodged the Rich Energy Bullet
Posted by: AlanJones (IP Logged)
Date: 10 July, 2019 22:05
Rokit actually sell their products. It's getting brand awareness in F1, NBA and NFL. I actually think we have reeled in a good deal with Rokit. Certainly when one owner has a Williams heart.

Quote:
AlanJones
Rokit actually sell their products. It's getting brand awareness in F1, NBA and NFL. I actually think we have reeled in a good deal with Rokit. Certainly when one owner has a Williams heart.


I still dont know what Rokit is or whether I would buy their stuff
Re: We dodged the Rich Energy Bullet
Posted by: shriekback (IP Logged)
Date: 10 July, 2019 23:43

Quote:
Mikef1
I still dont know what Rokit is or whether I would buy their stuff

I should add that this whole episode really happened to the right team, the one that is owned by a guy--Gene Haas--who spent two years in federal prison after being convicted of tax fraud he supposedly engaged in trying to make up for losses due to being found guilty of copyright infringement. He really should have seen this creep Storey coming, given what similar characters they are.

I am only sad now that Williams was so close to a deal with Storey. Perhaps they had Paddy Lowe doing their vetting of financial partners as well?

Edited 3 time(s). Last edit at 11/07/2019 00:04 by shriekback.
Re: We dodged the Rich Energy Bullet
Posted by: Andrew Hooper (IP Logged)
Date: 11 July, 2019 05:31
Yes to question ROKiT as a sponsor doesn't look at the men who are backing this company. Both are very successful in other businesses that they have run and are running.

At least it is easy to get background information in regard to their businesses while the Rich Energy enterprise was such a strange deal in terms of how little you could find out about the company and what and where they sold their products.
Re: We dodged the Rich Energy Bullet
Posted by: j-s (IP Logged)
Date: 11 July, 2019 06:56
Hilarious. 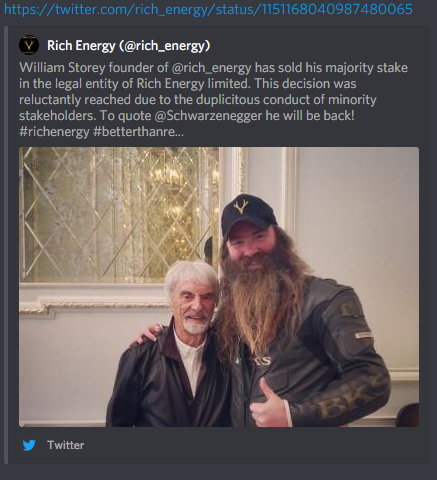 As much as I have been delighting in the comeuppance that Haas has been experiencing with the title sponsor that they stole from Williams now instead biting them, as Stu69 put it, I have also been troubled. Williams clearly would have signed on with Rich Energy had they not ditched for another team.

Did Williams not do due diligence on that shady company and the shady people (or person) at the top of it? They have been in bed with Saudis, Russians (with ties to Putin), etc., but they all at least had viable business operations such that they could plausibly make good on their contracted financial obligations. How could Williams, with all their experience, have come so close to putting themselves in the trajectory of that bullet?

I think this picture tells at least some of that story; Bernie Ecclestone stood to make a buck for himself in the deal and tried to broker it. A sleaze-bag, for sure, but also a formerly shrewd business operator, he really needs to retire, for his own sake if not everyone elses. Certainly, no one should trust his advice after his involvement in this affair.

In any case, I hope Williams sends Haas a case (or two) of good champaign to thank them. If the latter had not undercut their deal with Rich Energy, Williams wouldnt have been able to partner with ROKiT (which seems to be succeeding just as Rich Energy destroys the illusion that it even was a business), and their season would likely now look very much like potentially its last. Just imagine, first a late arrival to testing, Paddys subsequent leave of absence, no points after eight races in black and gold livery imposed on them by a title sponsor whose wheels are coming off and is now more keen to troll the team in the most juvenile of ways than provide it with support. I think it could well have been the last nail in the coffin (or a bullet in the headto not mix metaphors).

If we believe the reports;


That suggest that Haas has already received some money? Was the first year something like £13m and £7m has already been paid? It is hard to believe that the Rich Energy branding has been carried this long if nothing had been paid.

Fortunately it is likely that if this money is not received then Haas Automation will continue to ensure that the team has a reasonable budget. I don't have any ill feelings towards Haas, they were offered a deal and took it.

Had Williams signed the Rich Energy deal then the RokIT deal might still have come about, the front of the rear wing and barge boards and possibly a small logo on the engine cover.

Clearly this would most likely be for a smaller amount of money, but this plus Rich Energy may have totalled more.

At the moment as far as I can tell no outsiders know what the RokIT deal is worth or even who it is with.

RokIT is a real business with credible backers but it is in the mobile phone business so failure is a real possibility. :-(

If the deal is with the Rok group then another Rok brand may appear in the RokIT space.

Whilst it is clear that the status of the Haas deal is now unclear, it is still possible that the new owners have the intent and ability to continue it.

So I agree that the RokIT only deal is probably a better one than a Rich Energy only one, but without knowing how much it is worth it is hard to be sure.

A Rich Energy/RokIT deal may have been better.

Edited 1 time(s). Last edit at 18/07/2019 13:03 by CLOVERLEAF 888.
Current Page: 1 of 2
Goto: Forum List•Message List•Search•
Sorry, only registered users may post in this forum.
We record all IP addresses on the Sportnetwork message boards which may be required by the authorities in case of defamatory or abusive comment. We seek to monitor the Message Boards at regular intervals. We do not associate Sportnetwork with any of the comments and do not take responsibility for any statements or opinions expressed on the Message Boards. If you have any cause for concern over any material posted here please let us know as soon as possible by e-mailing abuse@sportnetwork.net