I remember we once had a topic with Williams (and even other team) memorabilia, so just wondering is anyone of you collecting some team related items, caps, shirts, model cars, books, posters, etc? Is anyone into this - at least as much as I am, or even more?

I'm asking because I'm into it very much, mostly 1/43 models, shirts, some jackets, caps, etc. And finding those cheap, and getting them to Serbia has proved both a costly sport and too much of an effort - and I still practice that. I've been collecting models since 2014, but other stuff much earlier, like 2003-2004, since BMW Wiliams F1 era.

If you're collecting such stuff, it would be great to share what you got, what you're still missing, and even if you're trying to sell any of those stuff if you don't need or have duplicates - we all could trade some of it.

If there's interest into this matter, I'll be glad to show you my collection so far.
Re: Williams Memorabilia
Posted by: Williams-123 (IP Logged)
Date: 14 May, 2019 09:17
I would really like a high quality 1:1 scale replica F1 steering wheel but they cost around 3 thousand US dollars.
Re: Williams Memorabilia
Posted by: Stuart L (IP Logged)
Date: 14 May, 2019 14:00
Ive about 250 books abd origrammes from my 35 years following the sport. My real pride is I have signed prints from the 84/85?season of Mckaren winning the 84 drivers and constructors abd orist winning his first title in 85. Each framed abd signed by Lauda, Prost, Barnard and Ron Dennis. I loved the Marlboro McLaren livery.

Nothing if real value from Williams, I had an original Ginny Willians different life book but its disappeared.
Re: Williams Memorabilia
Posted by: Rosberg (IP Logged)
Date: 14 May, 2019 20:03
This is what I've been working on; a 1/20 diorama set based on the 1985 season. I built and painted/sprayed these cars/figures myself. 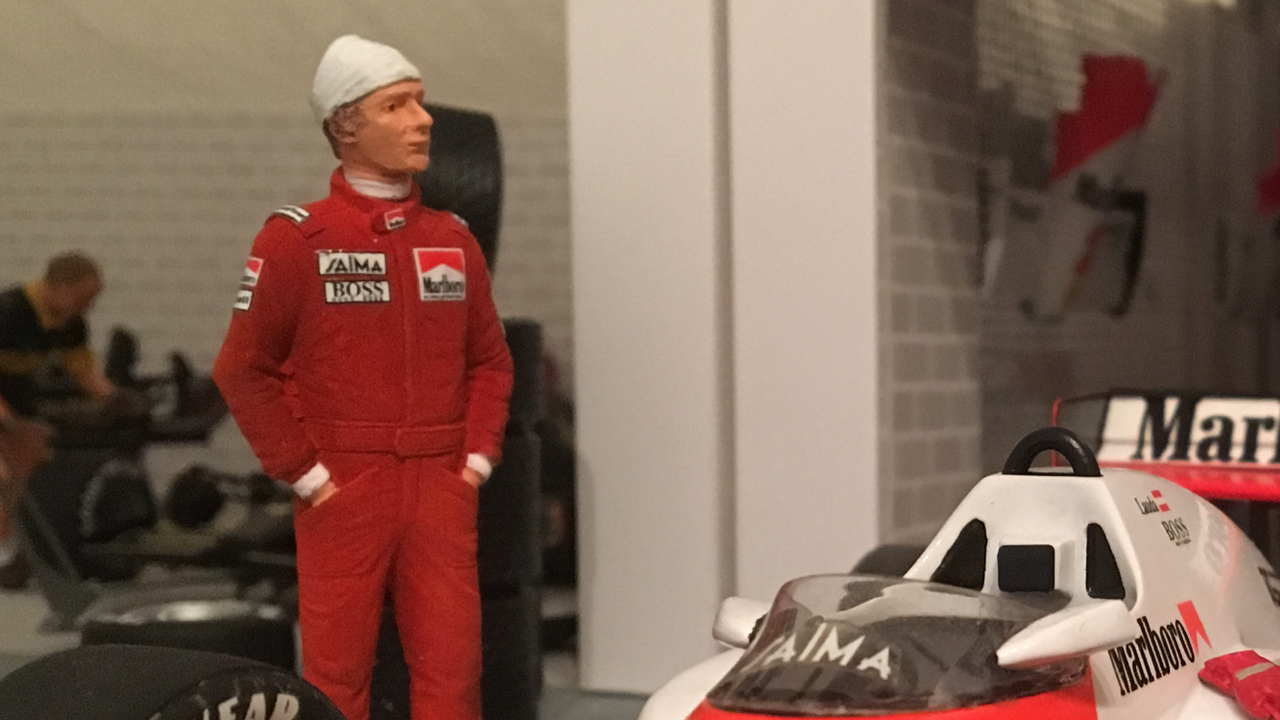 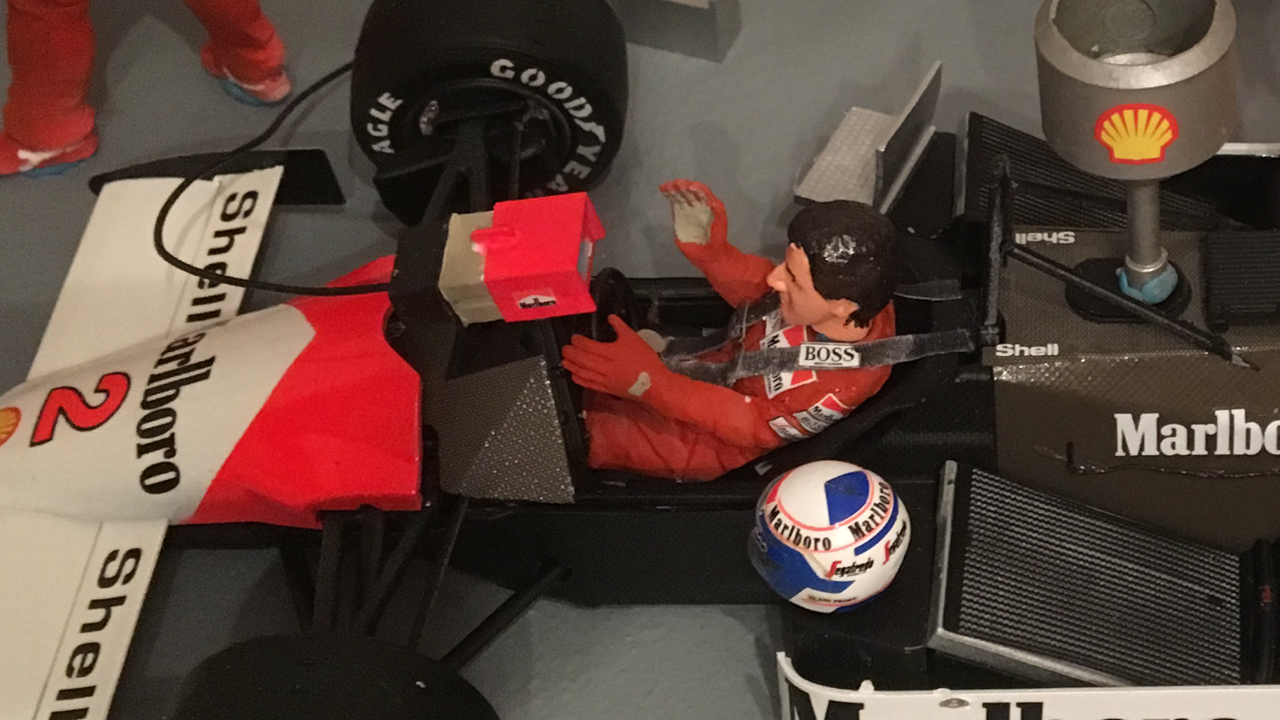 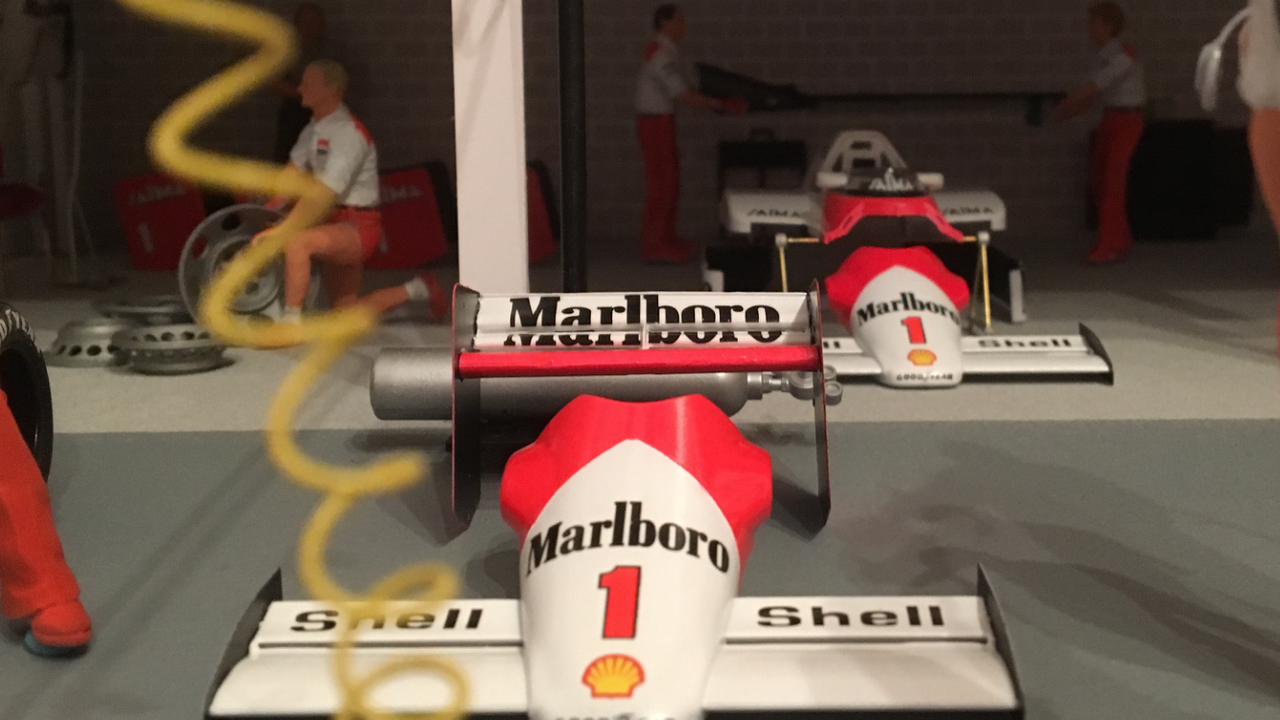 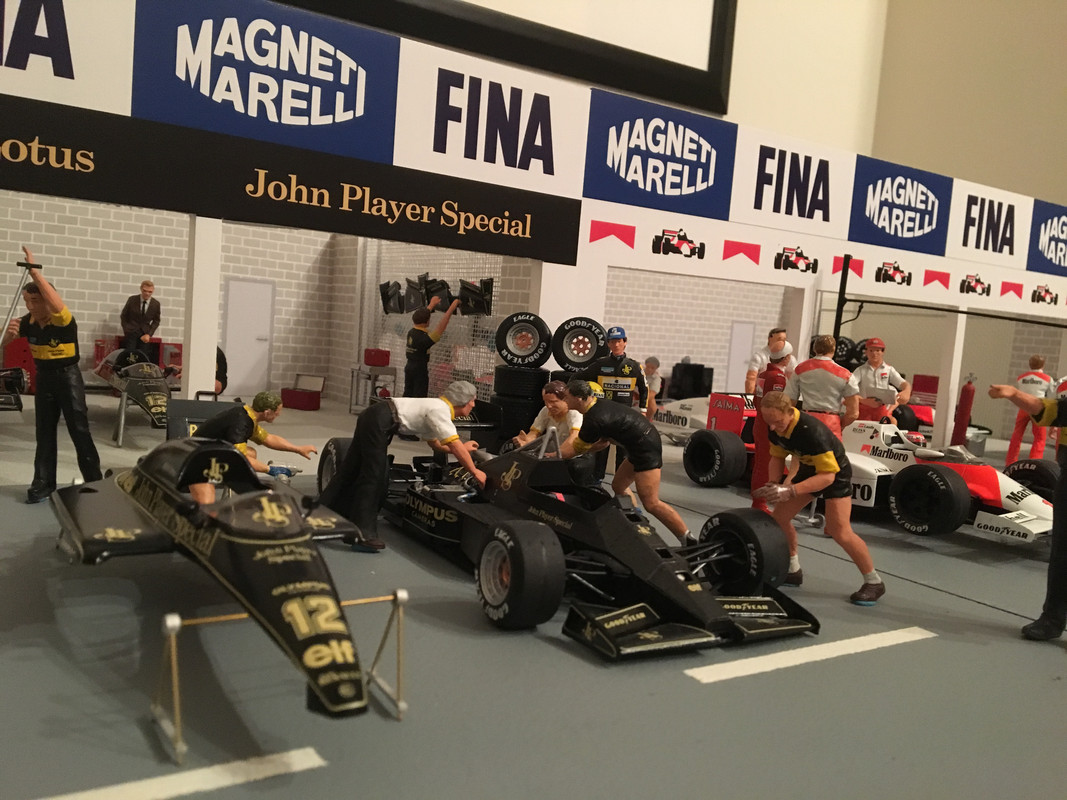 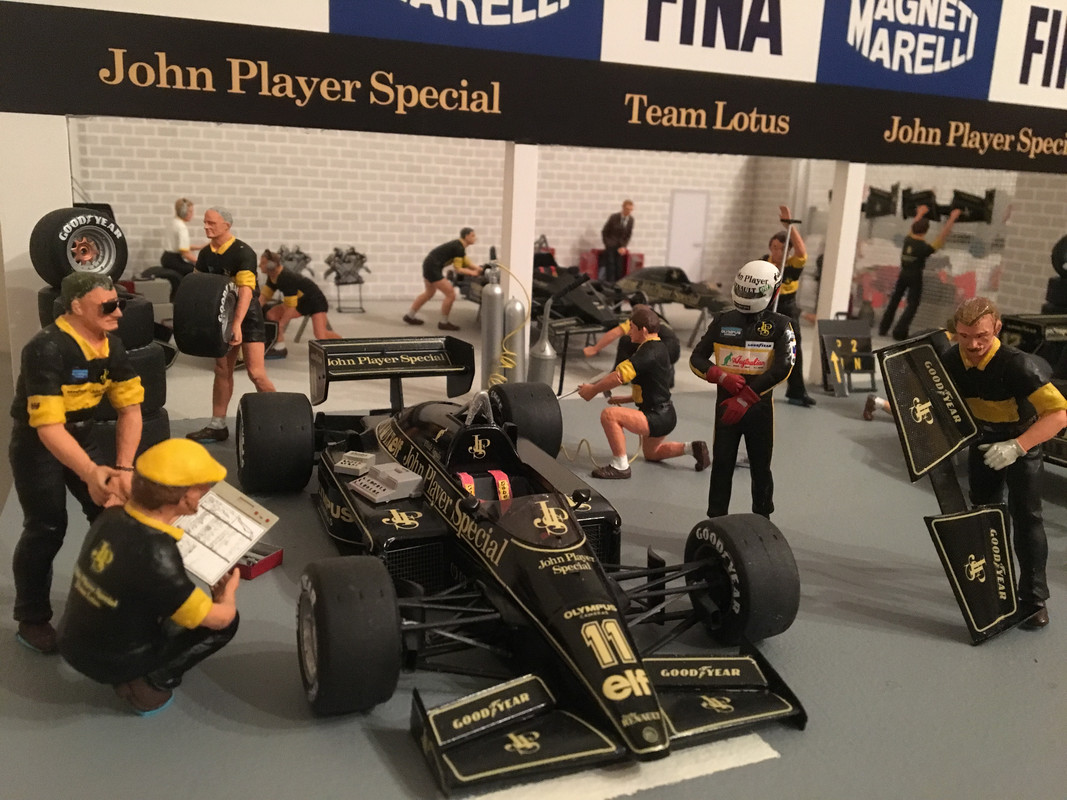 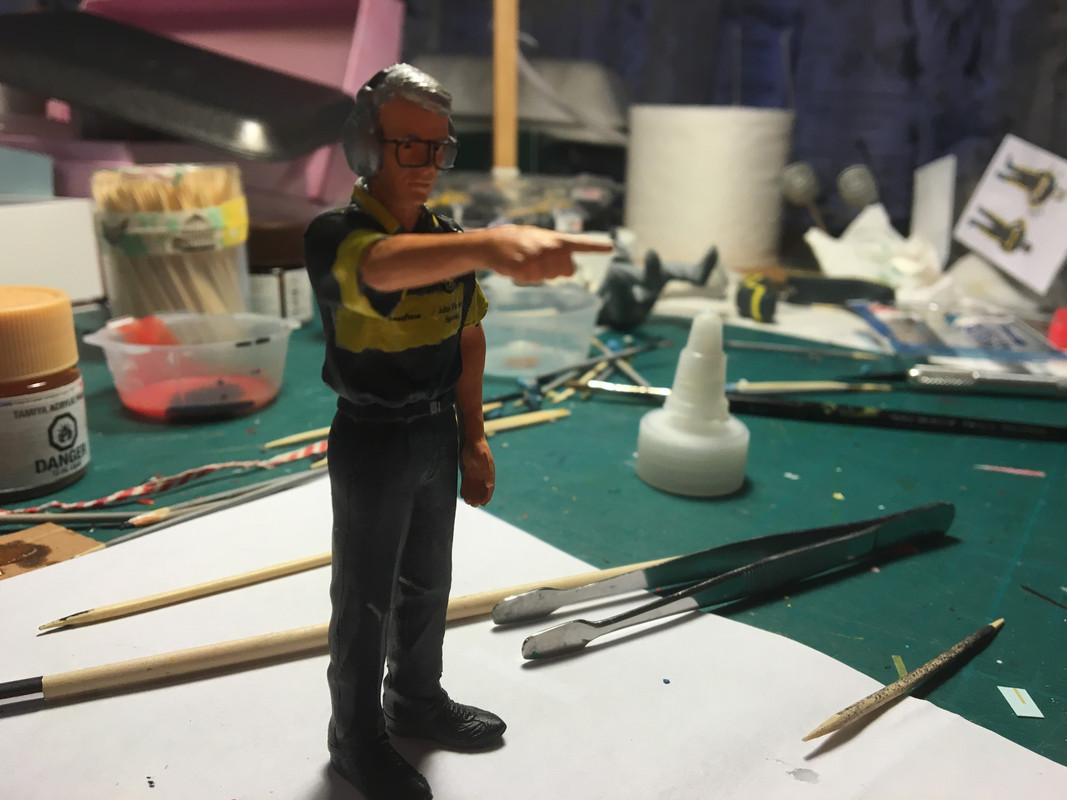 Do you recognize him? 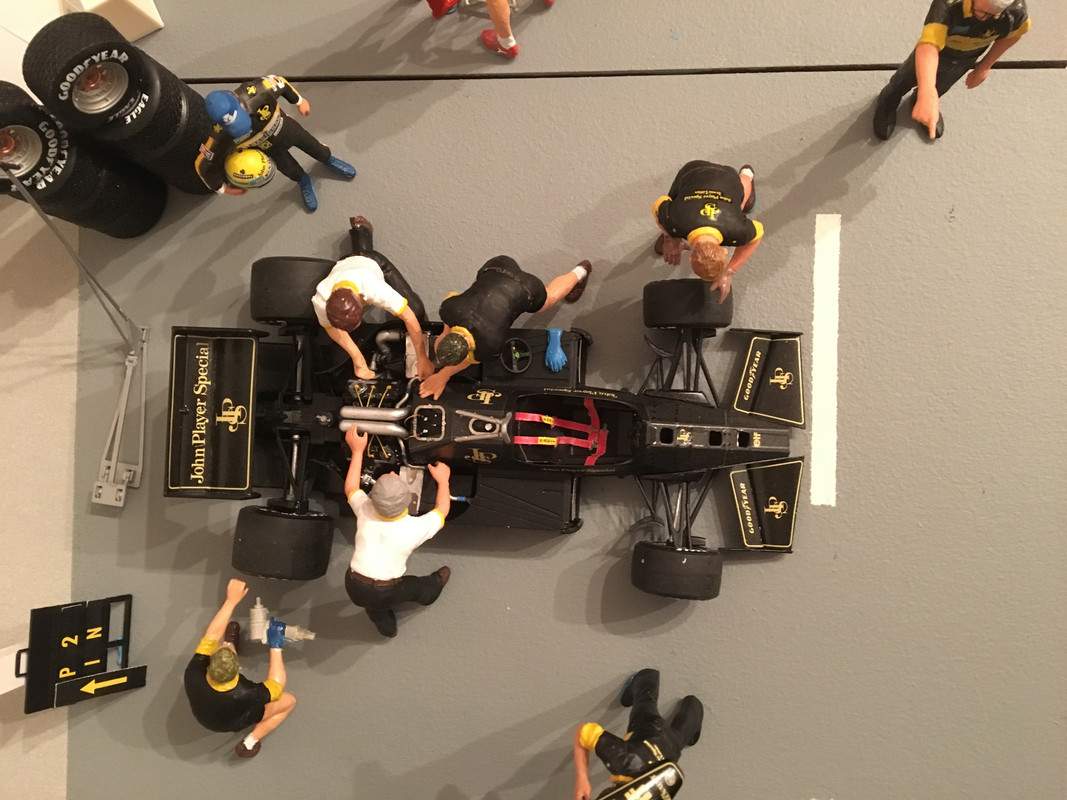 Renault technicians having a check of their engines. 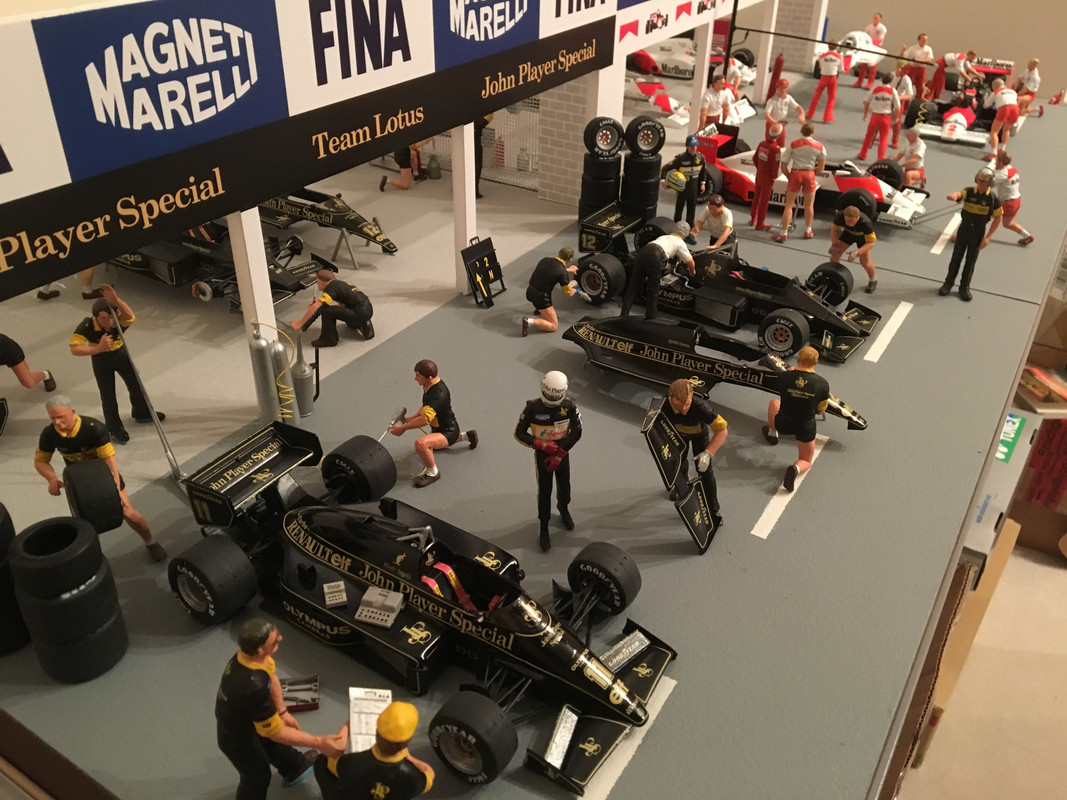 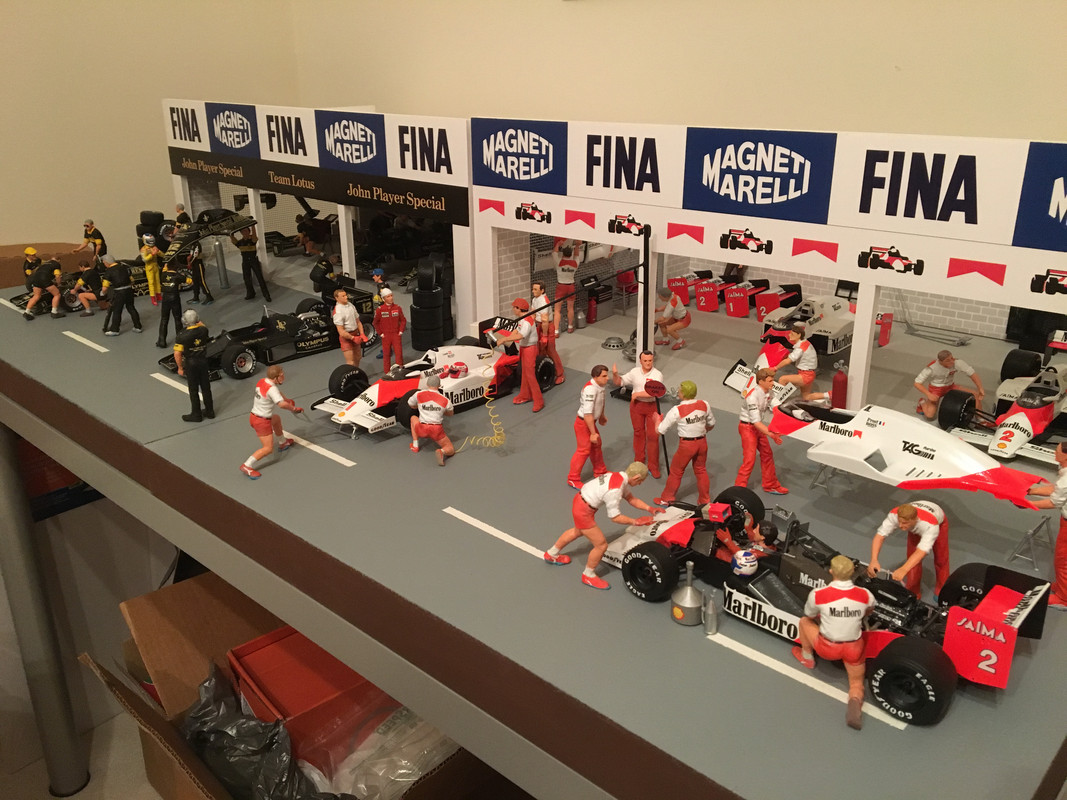 Quote:
Rosberg
This is what I've been working on; a 1/20 diorama set based on the 1985 season. I built and painted/sprayed these cars/figures myself.

Do you recognize him?

Renault technicians having a check of their engines.

Yet, I'm following the sport 26 years, and I've been collecting these for just few years.

@Rosberg, that's impressive, really. I can't think of myselft working on these, they require a lot of effort, patience and time, of which I'm lacking the last two

I have been doing some car modelling whils I was younger, but not anymore, which is a shame. However, your dioramas are - breathtaking to say the least. Hats down to you sir!

Here's my collection so far, started from 2014 and still growing. I'm not doing any dioramas, just collecting the models and other WF1 items.

One of my most valuables is (if you can believe it) this 2012 Spanish win FW34, with Pastor's signature on the box. 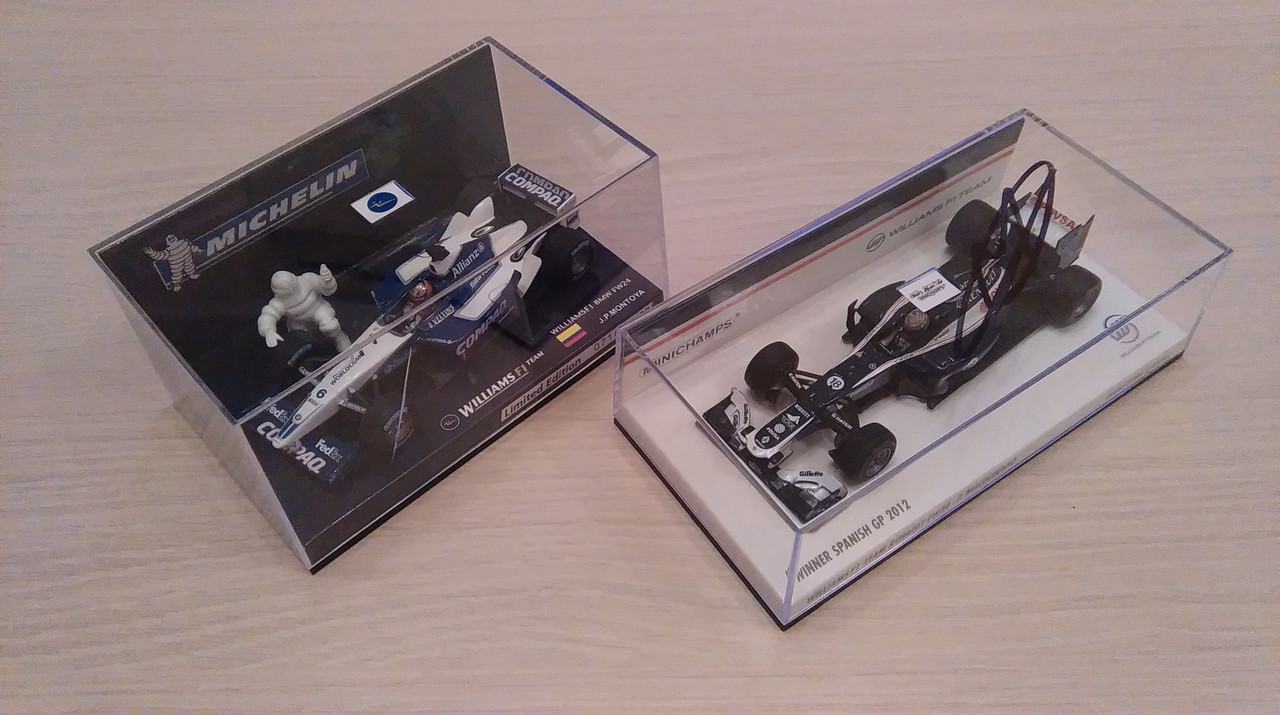 T-shirts, jacket and caps I collected so far (although I've lost some of BMW WF1 era ones) 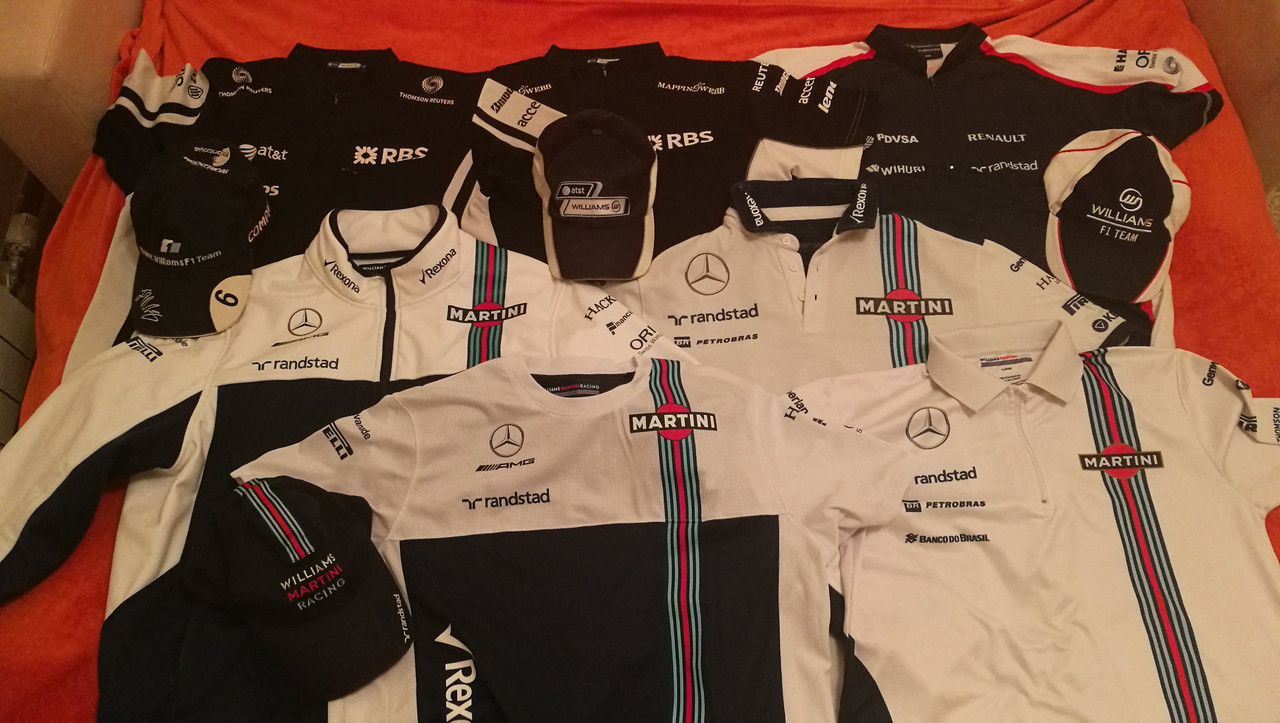 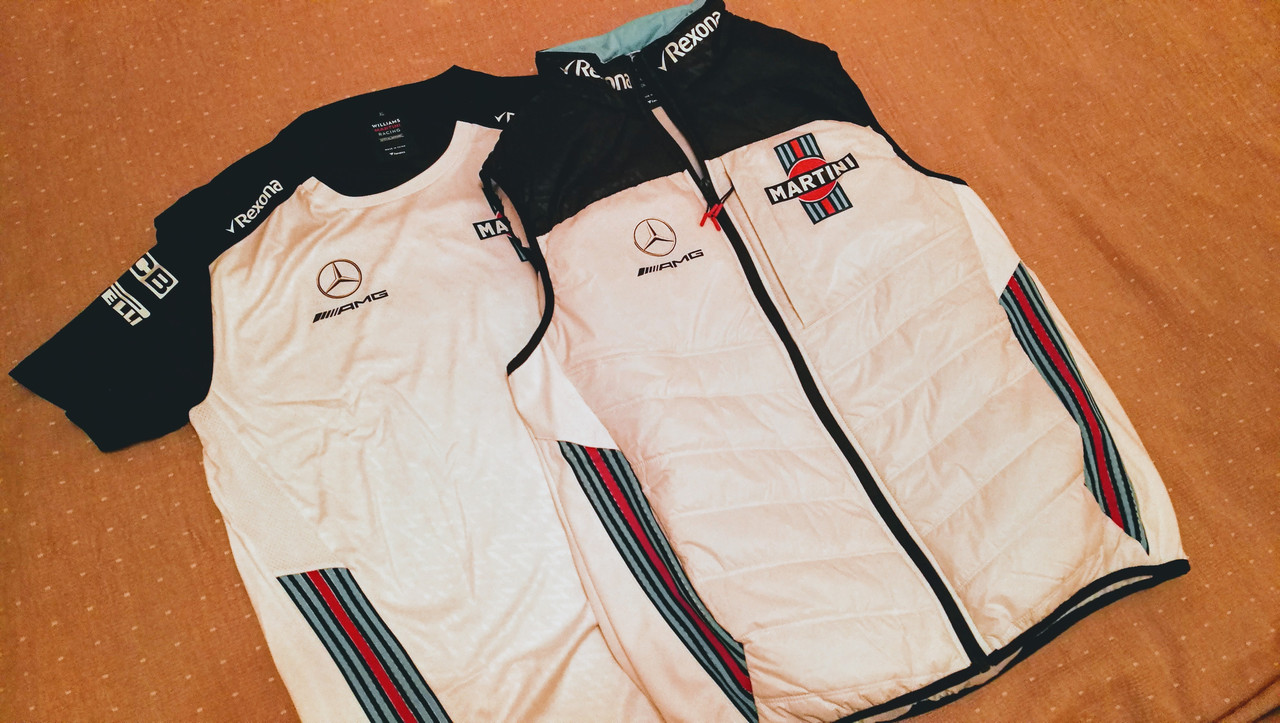 Probably my favourite is this 1994 Rothmans Williams jacket I got. An old, really old jacket, but my favourite nontheless. 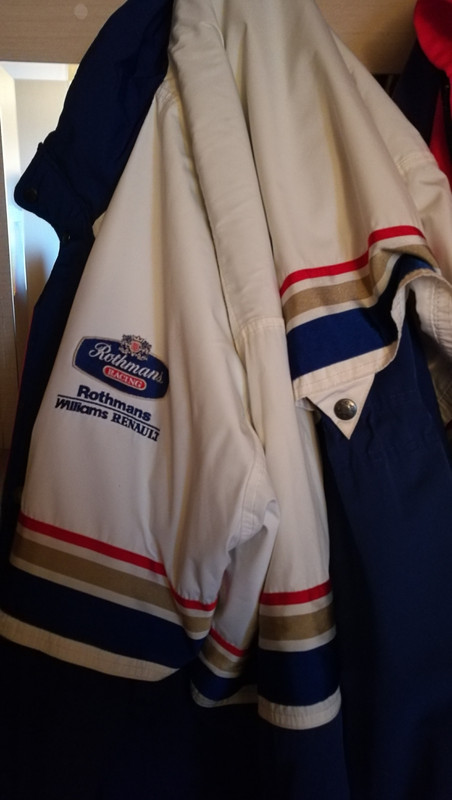 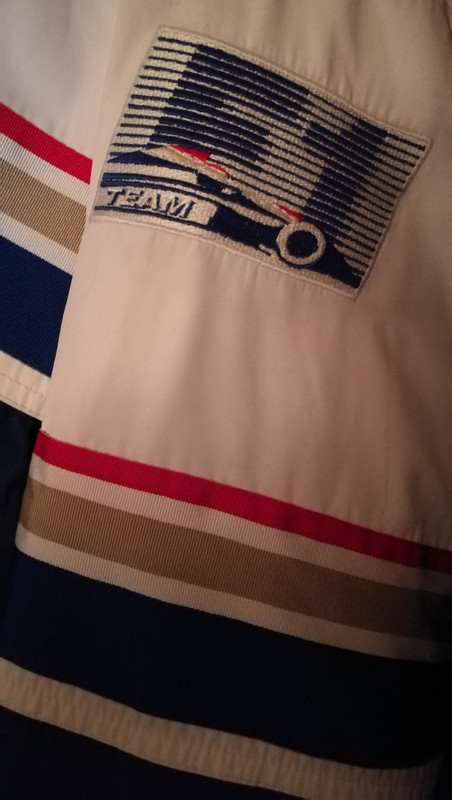 Few of the books I got. 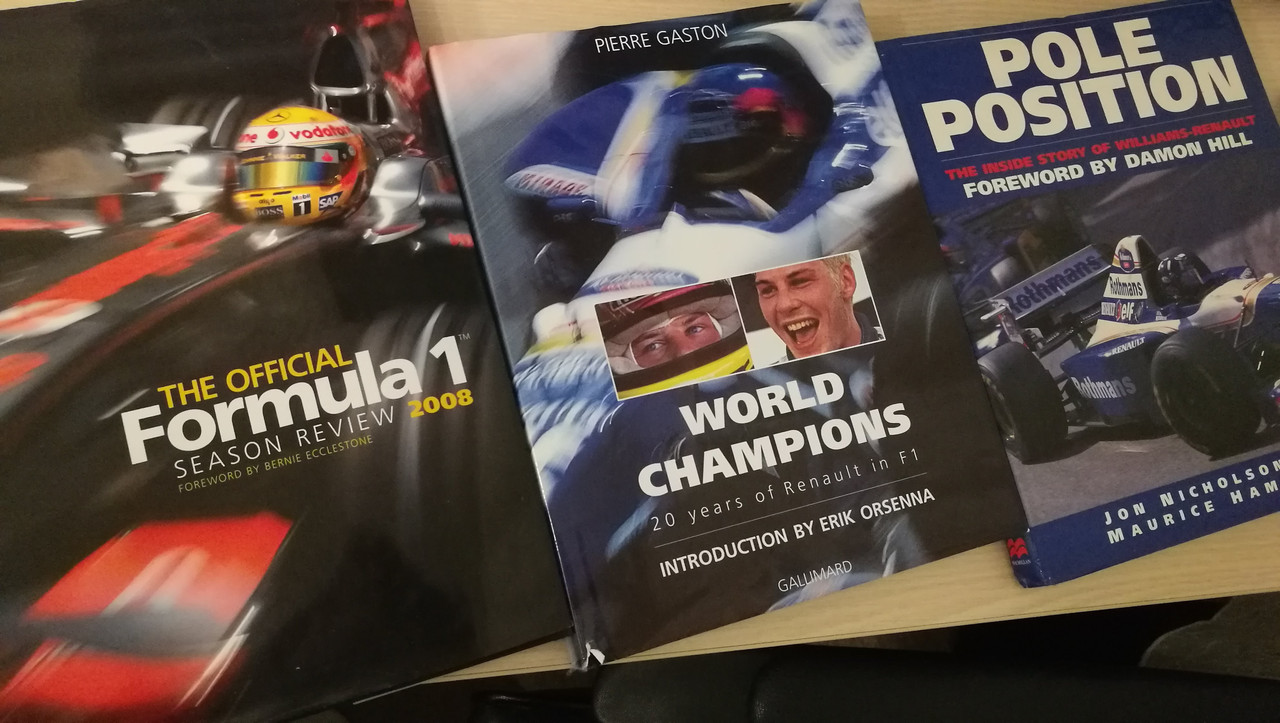 One of the latest books I got with this Renault 5 Turbo. 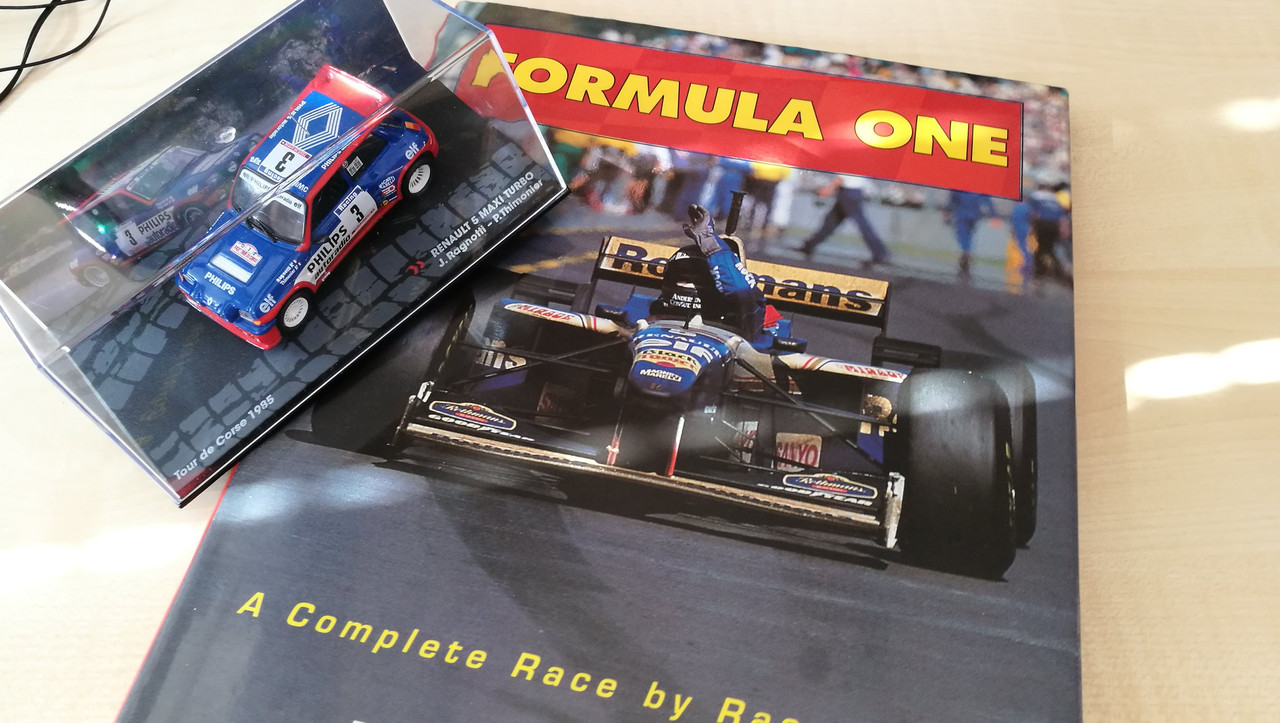 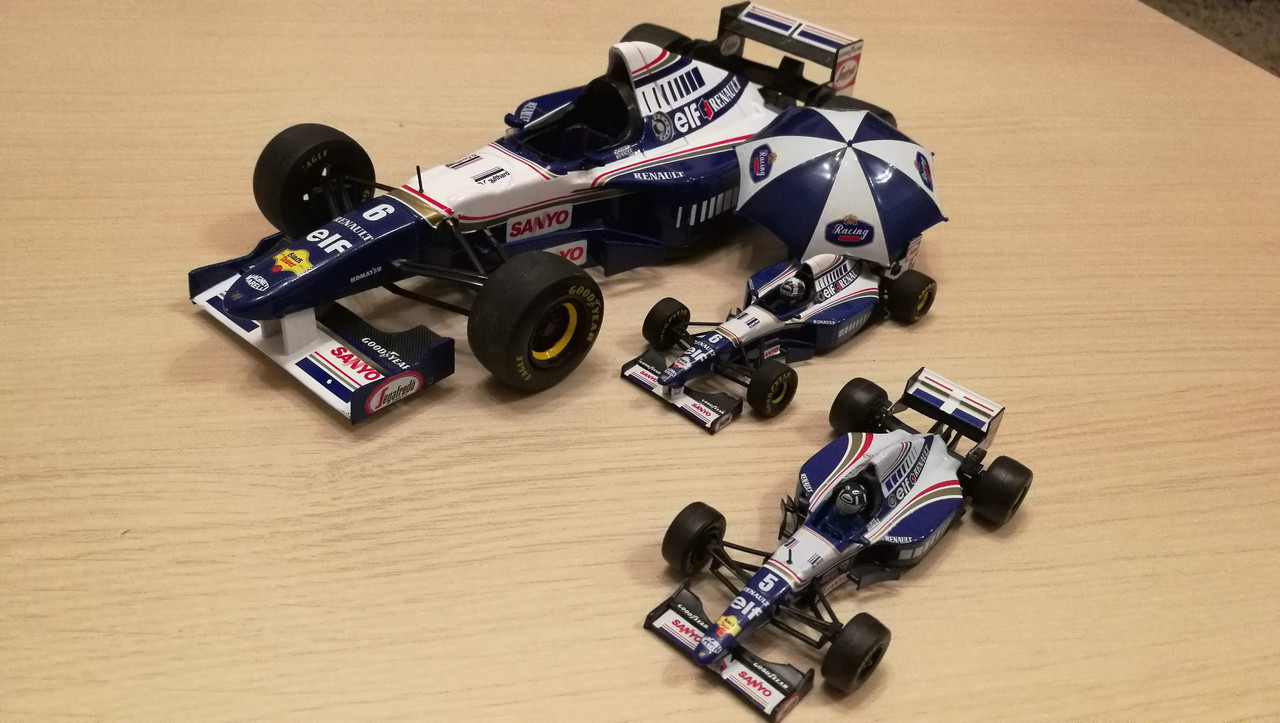 The collection so far. 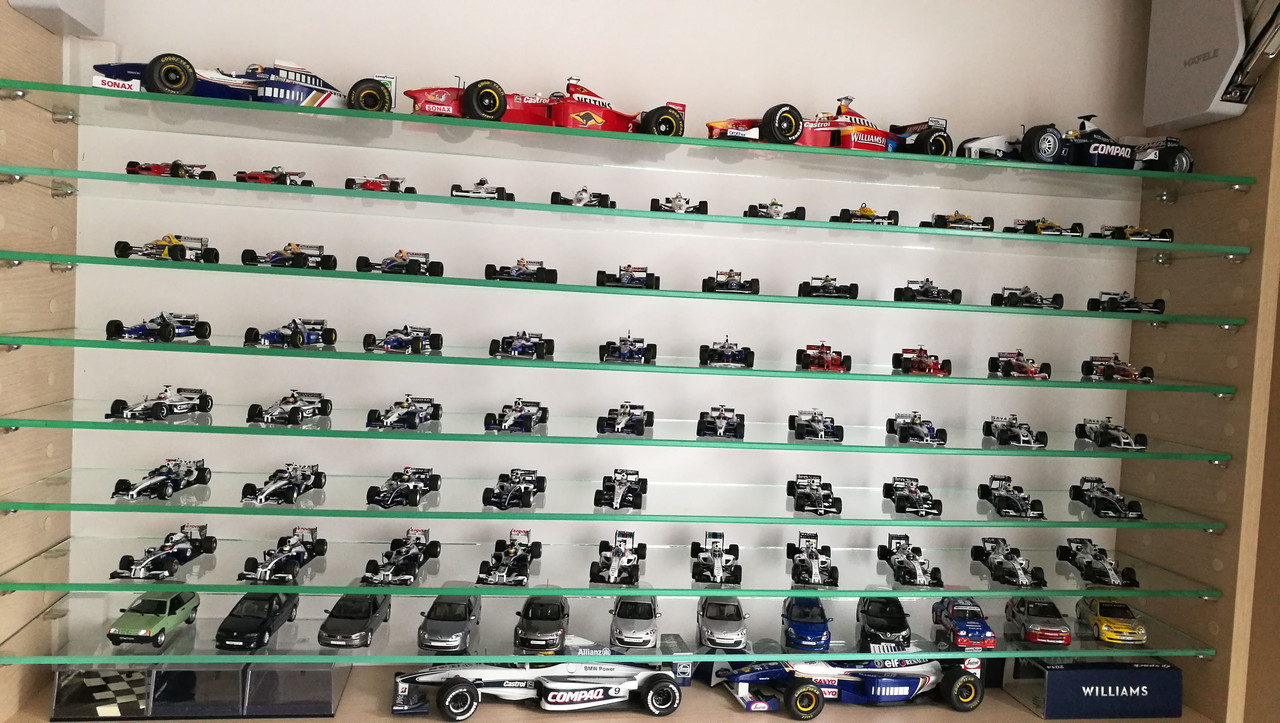 Goto: Forum List•Message List•Search•
Sorry, only registered users may post in this forum.
We record all IP addresses on the Sportnetwork message boards which may be required by the authorities in case of defamatory or abusive comment. We seek to monitor the Message Boards at regular intervals. We do not associate Sportnetwork with any of the comments and do not take responsibility for any statements or opinions expressed on the Message Boards. If you have any cause for concern over any material posted here please let us know as soon as possible by e-mailing abuse@sportnetwork.net